Akron, OH – Tom Zawistowski, President of the Ohio Citizens PAC and Executive Director of the Portage County TEA Party, called into question the motivation of several members of the Ohio House today concerning a vote to be held this Thursday, June 6th, to override Governor Kasich’s line-item veto of the Medicaid Expansion Freeze passed by both the Republican controlled Ohio House and Ohio Senate. Zawistowski explained “Normal Ohioans would think that the Republican controlled House and Senate would easily override Governor Kasich’s line-item veto(s) when they reconvene this Thursday. After all our state poll last week showed a majority of Ohioans did not want Kasich to veto the Medicaid Expansion Freeze, which does not affect traditional Medicaid recipients, and 81% of Republican’s did not want Kasich to veto the Freeze. Then you had as Super Majority in the Senate pass the state budget with the Freeze and a near Super Majority of 59 in the House passed the same state budget. However, no veto has been overridden since 2004, to my knowledge, and the reason is the same as always – a conflict between the Representatives own self interest and their duty and responsibility to represent their constituents and the best interests of the State of Ohio.”
Zawistowski went on to explain, “First of all you have people like Marie Anielski (Dist 6), Mike Duffey (Dist 21) and Terry Johnson (Dist 90) who are termed limited out of the House and to whom Kasich can promise appointments to state jobs to get them not to vote to override the veto. Then you have people like Keith Faber (Dist 84) and Dorothy Pelanda (Dist 86) who are not only termed out of office but who are also running for state offices and who will decide to vote on the veto override based on what is best for them and their next campaign. Finally you have the Franklin County “Republicans” like Anne Gonzales (Dist 19), Mike Duffy (Dist 21), Laura Lanese (Dist 23) and Jim Hughes (Dist 24) who have close ties to Governor Kasich’s political machine which get’s a lot of money from companies and individuals who benefit from Medicaid Expansion and other cutbacks the Governor line-item vetoed. All Kasich needs is for seven of these nine people to not vote at all on Thursday and his veto’s will stand.
Zawistowski concluded, “This is not a mater of politics, it is a matter of mathematics. We are $8 billion over budget and Kasich want’s to add a hundred thousand more people to this failed program! We simply cannot afford to continue forcing hard working, tax paying, Ohioans to pay even more to buy health care for able bodied non-working Ohioans. Medicaid is for the elderly and the disabled and children and it needs to stay that way. All concerned Ohioans need to call their Republican Representatives in the Ohio House and Ohio Senate by the end of business Wednesday, and get their pledge to vote on Thursday to override the line-item veto of the Medicaid Expansion Freeze.”
Republican House Members 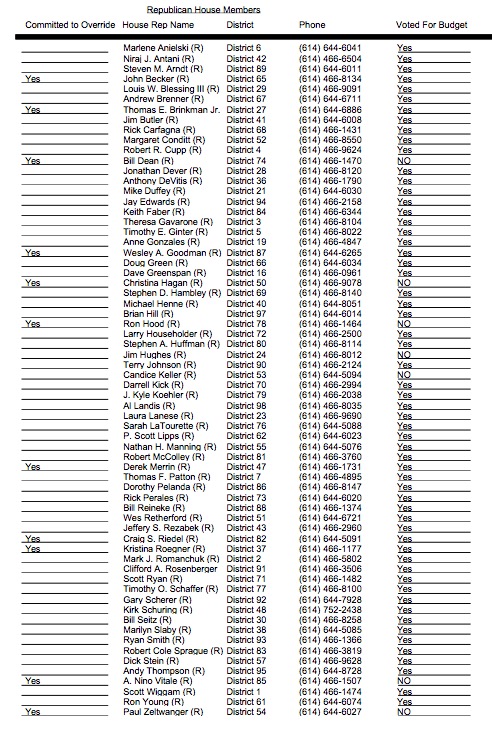 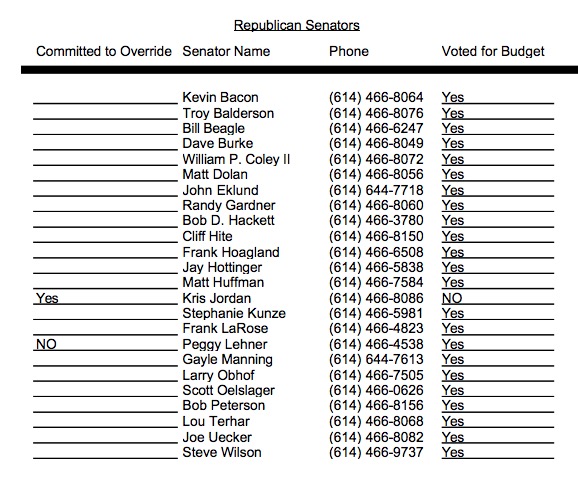