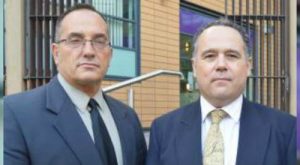 What did they do that resulted in their arrest and conviction?

No. It was none of the above. I had to fact check this story, because it almost sounded like something from Babylon Bee.

Overd and Stockwell are “street preachers.” On June 6, 2016, they publicly proclaimed that Jesus is “the way, the truth and life” and that He is the only way to God, the Father.

According to ChristianConcern.com “during the four-day trial, prosecutor Ian Jackson, claimed: “To say to someone that Jesus is the only God is not a matter of truth. To the extent that they are saying that the only way to God is through Jesus, that cannot be a truth.”

Further the “prosecutor claimed that quoting parts of the King James Bible in the context of modern British society ‘must be considered to be abusive and is a criminal matter.”

“The prosecutor had argued that free speech must yield to multicultural reality in modern Britain, and that there was a clear threat to violence due to the words of the preachers and the criticism of Islam.”

“The men were found guilty under Section 31 of the Crime and Disorder Act 1998, for using ‘threatening or abusive words or behavior or disorderly behavior within the hearing or sight of a person likely to be, caused harassment, alarm or distress, thereby, and the offence was religiously aggravated.’”

Michael Phillips, the attorney, representing the street preachers, said:
“This prosecution is nothing more than a modern-day heresy trial – dressed up under the public order act.”

Mr Stockwell said: “Men should be able to proclaim the truth and have diverse differences in the public forum, agreeing to disagree without harm or repercussions. Truth today is the new hate” He charged that Islamists and other radical groups are trying to silence free speech.

Aside from British law, or other possible infractions not correctly reported, here is the Truth. Jesus proclaimed, “I am the way, the truth, and the life. No one comes to the Father except through Me.”